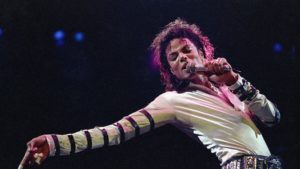 FILE – In this Feb. 24, 1988 file photo, Michael Jackson leans, points and sings, dances and struts during the opening performance of his 13-city U.S. tour, in Kansas City, Mo. Five years after Jackson’s untimely death at age 50, the singer remains a pop culture powerhouse, proving to be just as big a moneymaker in death as in life. He’s graced the stage at the Billboard Music Awards via hologram, appears on a new album of unreleased songs and is generating tens of millions of dollars a year – money that will continue to grow and keep Jackson’s mother and children living like entertainment royalty. (AP Photo/Cliff Schiappa, File)

« Over and Over » – Chidinma feat Indira